Angels In The Olympics

I share these two excerpts from chapters 6 and 13 of "Aunt Sadie's Angel" in celebration of all of the 2016 Olympians (and their predecessors) across the globe - each  a champion in his or her own right. I am especially reminded of USA, Shot Put , Gold medal champion Michelle Carter and Swimming, Gold medal champion Simone Manuel!

Chapter 6
“CASTING DOWN THEIR GOLDEN CROWNS” 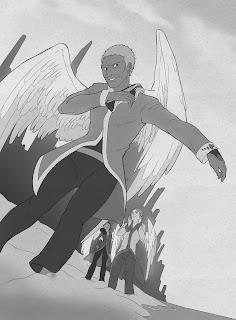 As Rashi was nearing the end of his story, they approached the gates of pearl. As if someone knew they were coming, the gates opened wide, and Rashi and Wings walked right in. They went straight to the receiving area. “Excuse me, I’m looking for Jesse Clayton. Is he around?”  “Check at the shore, he and his buddies usually gather at the sea for crown casting first thing every morning.” As they departed, Rashi looked at Wings and asked, “You know what crown casting is?” “I’ve heard a lot about it. Apparently, it’s some kind of social activity among the ancients. They get together in large groups, and toss crowns around the water. It’s considered a show of devotion to the Lord God. Whoever is able to cast his crown closest to the other side is considered the most devout and will, round by round, garner the crowns of the others.” “It’s akin to shot putting or discuss throwing.” “Really?” “Ummhmm. All the Olympic throwing events that the mortals play having their origins in crown casting.”


There they were - Jesse Clayton and twenty-three other elders. Each had several crowns of Gold. The first guy stepped up to the shoreline and turned so that his back faced the opposing shore. With his right arm horizontal to the ground, he held the crown with the base of his fingers. He pushed it against his neck and underneath his chin. He held his stance for a moment. Then he lowered himself and began to glide with a short hoping movement so as to increase his momentum. When his right foot was perpendicular to the other shore, he extended his left leg and firmly planted his foot for support. Just then, he swung his left arm, used the strength of his legs to lift his body, quickly exerted the forces of his trunk and arms, and released his crown at a 40° angle over his straightened left leg!
“Wow, he’s pretty good.” “You ain’t seen nothing yet kid,” a second of the group exclaimed as he moved toward the sea.  It was quite entertaining to watch the twenty-four elders as they cast down their golden crowns around the glassy sea. Rashi and Wings watched respectfully as JC took his turn. His crown landed clear on the other shore. “Now, that’s how you cast a crown,” he said as he turned to acknowledge Rashid and his companion.  “How can I help you son? What brings you back this way?”

Chapter 13
“IT AIN'T OVER UNTIL GOD SAYS IT'S OVER” 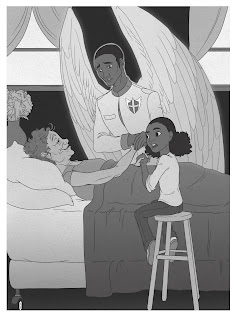 As they departed the Lord said to Sadie “Should I take you for the full tour or would you rather just get your wings and your crown and save the sightseeing for some other time?” “No I wanna see everything.” Sadie insisted.  So they entered by the South Gates. “It’s a huge city you know? It has twelve gates.” “So I’ve heard.” “Would you like to take a swim?” “Now Lord you know us colored folks don’t care nothing ‘bout no swimming.” “Sadie you do realize that the Elders all swim – even the colored ones.” Sadie hadn’t considered that. “Don’t worry, there are no slave traders in the Sacred Sea” the Lord assured.
Posted by Unknown at 4:46 PM No comments: